"Dingle Dangle Scarecrow" is a very popular children's song. Most people believe that it is a traditional nursery rhyme but it's not! In fact it's a song written by Mollie Russell-Smith (lyrics) and her brother Geoffry Russell-Smith (music) from England. It was first published as "Wide Awake" in 1964 by Mills Music, London.

The Speks have adapted "Dingle Dangle Scarecrow" to make it sound more like a traditional Irish song. We focus on the scarecrow and increase the tempo of the music to reflect the lively scarecrow who jumps up and shakes his hands and feet at the end of each verse! It is a great sing-along song.

Finally guitar, mandola, accordion, fiddle and flute play the first part of the Irish traditional reel called "Anderson's". This finale of Irish music symbolises the scarecrow's lively dancing as he shakes his hands and feet.

Click on the play arrow below to listen to our version of Dingle Dangle Scarecrow set to Irish music. Go to The Scarecrow page where you can share our nursery rhyme with your friends and/or buy it as an MP3 download. 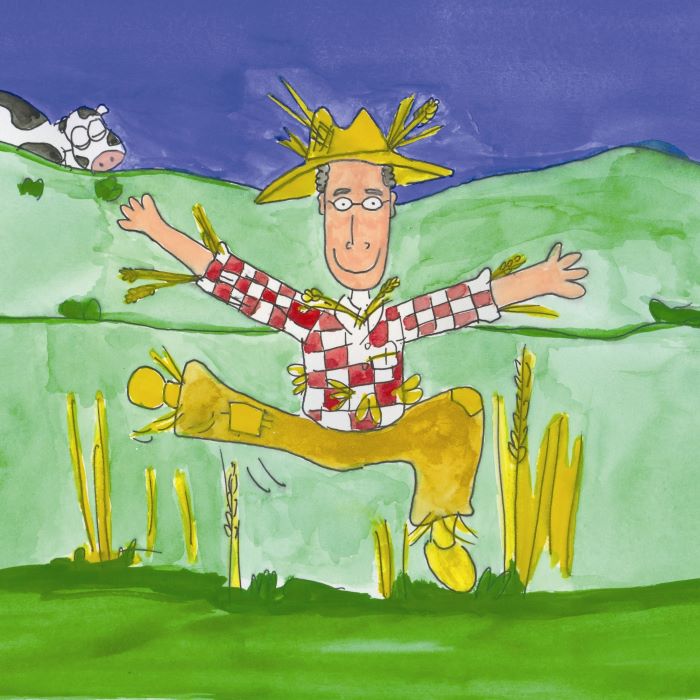 Chorus:
I'm a dingle, dangle scarecrow
With a great big floppy hat
I can shake my hands like this
And I can shake my feet like that

Here is the sheet music (or musical notes) of the original version of "Dingle Dangle Scarecrow" published by Mills Music in London in 1964. This song/publication is currently owned by EMI Harmonies Ltd. 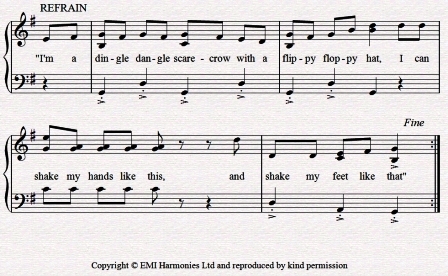 Art: Make a model scarecrow from straw and old household material. Illustrate and paint a scarecrow. Watch an episode of Worzel Gummidge!

Social, Environmental and Scientific Education: What is a scarecrow's function? Are scarecrows still used today? How are they made? Stress the importance of crops. Combine with discussions on farming and the contribution that farmers make to society.